Earlier we talked about the Best Counters for Sentinel Mini-Boss of Act 6.1.2. Now we have some tips for the Boss of the same quest. Ultron is not that tough to fight the node makes him annoying. Let’s know what challenges you have here and what are the best counters.

The EMP Modification is the primary concern that will kill you in a few seconds only. So let’s know the solution. 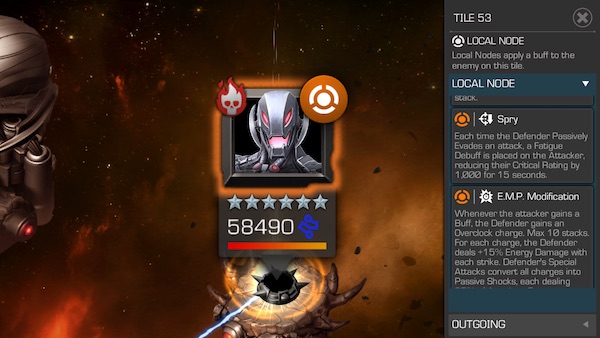 What are the best counters for Act 6.1.2 Ultron Boss

Feature: When Nebula has minimum 5 Shock Charges she can shut down everything. Power gain, EMP, and even Special Delivery that forces you to use a Special attack every 15 hits. (applicable against robots only).

How to get 5 shock charges instantly and without Proxima Midnight Synergy?

The good thing about this Ultron Boss is that there is EMP Modification and Spite. So if you evade 2 attacks even basic attacks the dexterity will trigger power gain buff and Ultron will gain power and reach L1. Evade Special 1 attack and you will get energy damage and it will give you minimum 5 charges automatically at the cost of very light damage.

After you have 5 shock charges ready: It will shut down power gain as well as evade. So you can intercept him to death.

There is one more good thing about this node is that Ultron gains very slightly power continuously (not always). If it happens in your case, he is like to have L1 ready after each combo. So you keep baiting L1 and keep hitting him.

Bonus Tip: Do only 4 hits combo as 5 hits combo could be dangerous. It’s not because he evades (he won’t evade anyway after you have 5 shock charges), but 4 hit combo gives you enough room to dash back his hits and intercept.

He hits hard and his immunity triggers whenever he receives damage over time debuff. So he takes light damage and triggers his immunity to stop it. However, he cannot shut down power gain.

5-star Electro is a rare champ to see unless you are Cow Whale. Just kidding! If you got him, then it should be easy to beat Ultron. Electro is immune to energy damage.

Korg is Immune to shock Damage. So he should not take such damage from Ultron Boss. I don’t have a 5-star Korg. If anyone tested, please comment to let us know.

Hulk recovers 70% of the health caused by Damage Over time debuff. However, that 30% damage is too much that you cannot damage more than 25% of Ultron using R4 Hulk Ragnarok before you Die. Not the best option, but if you got no good counter, he can do with few revives, but make sure you have health potions, else it will cost around 10 revives I guess.

If you have a champion that controls power and can stop Ultron from using Special attack, then you can easily one shot hit. However, you must use a special attack every 15 hits to avoid Damage cause by failing to follow Special Delivery. So Magik might not be useful unless she is R5 and you get lucky enough to get L2 before you die of shock or Combo Failure damage.

Vision OG (Duped): He starts the fight with around a bar of power and also gets power gain (synthesis) between fights. So he is the best option here to control power.