Act 6.3.6 Thunderstruck path is one of the annoying paths if you don’t use the right champs and resources. It’s not just about the champ, you also need to use a boost that is available for Act 6.3.

What are the challenges?

Thunderstruck Node (for the whole path)

If the defender is not suffering from Shock Debuff, it takes 90% less damage. Shock debuff deals 25% more damage.

Defenders regenerate 50% base health every 15 seconds over 5 seconds. You can only heal block and cannot reverse the healing effect.

95% chance for the nullifying effect to fail.

While regenerating defender goes unblockable and gets 65% attack boost. 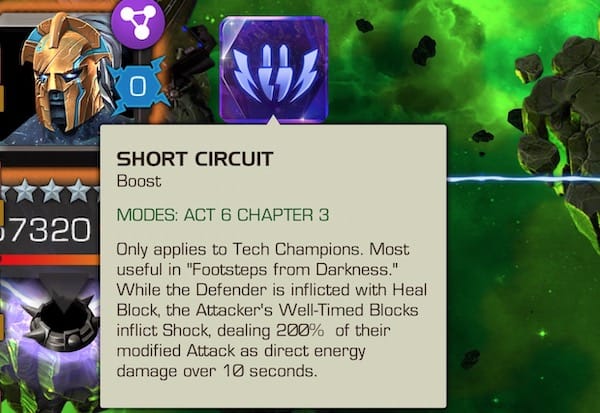 You should already have this Short Circuit Boost if you have explored other paths of Act 6.3.6. However, if you have already used it (rather misused it), then you have to spend 50 units to get it from the Store’s Boost section.

What does the Boost Do?

The boost applies to Tech Champion only. If the heal Block is applied, every well-timed block (parry) will apply shock debuff on the opponent, so that you can keep doing usual damage (more than usual actually).

What are the best champions to use to smoothly clear this path (Best Counters)?

Heavy Attack and Special 1 attack inflict Heal Block. Special 1 is even unblockable that guarantees to inflict heal block. Make sure to use heavy or Special 1 only when the defender is healing. Special 1 also inflicts shock debuff that lasts quite long and controls the opponent’s power. While heal block is active just keep parrying to apply more shock debuff (provided that you have used that short circuit boost that we explained above).

Finish the combo with a light attack and Mysterio will inflict heal block for 1 second + 1 second for each chemical gas. Mysterio can build a maximum of 3 chemical gas that means, the heal block will last a maximum of 4 seconds, but you can also heal block every time you finish the combo with a light attack. When the opponent is heal blocked, you can parry to apply shock provided that you are using the Short Circuit boost that we explained above.

Make sure you get the 100 charges first before his heal block can last a little longer.

Special 3 can inflict heal block for 30 seconds, but you need to use Power Boost to get to Special 3 quickly after you use one.

Use Special 2 when the opponent is healing to heal block. He is probably not the best champ you would want to use on this path.

Can you finish the path without Short Circuit Boost?

The Hardest Fight: The Champion

No, You can knock down all the champions without Boost when you are using Iron Man Infinity War, but you cannot knock down “The Champion.” This guy is unstoppable most of the time and he regenerates from the node and from his basic ability, so he will also be unblockable most of the time. You get few opportunities to hit him because he is either unblockable or unstoppable.

Can Nebula Do this path?

She can definitely inflict lots of shocks, but it doesn’t last long and she cannot heal block. So boost cannot be used with her. She might help to clear the path, but she cannot handle “The Champion” fight.