Heralds of Galactus (Map and Buffs) – For All 7 Days 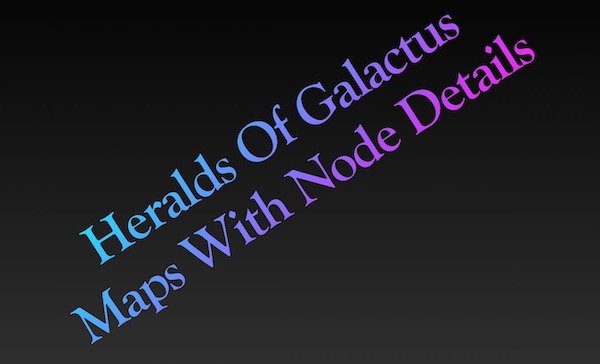 If you keep seeing Old Map, please refresh the page a couple of times. Sometimes Browser Cache will prevent you to see the updated Map. It might take up to 1 hour to add the new map on this page after it is live in the game.

Herald of Galactus is live now that comes in 5 Difficulties. Whatever difficulty you face the counters should be the same. We will be adding new Maps each day when they are updated. If you want to make sure you clear without trouble, you can visit this page and come back every day to have a look at the map before you go ahead to clear. 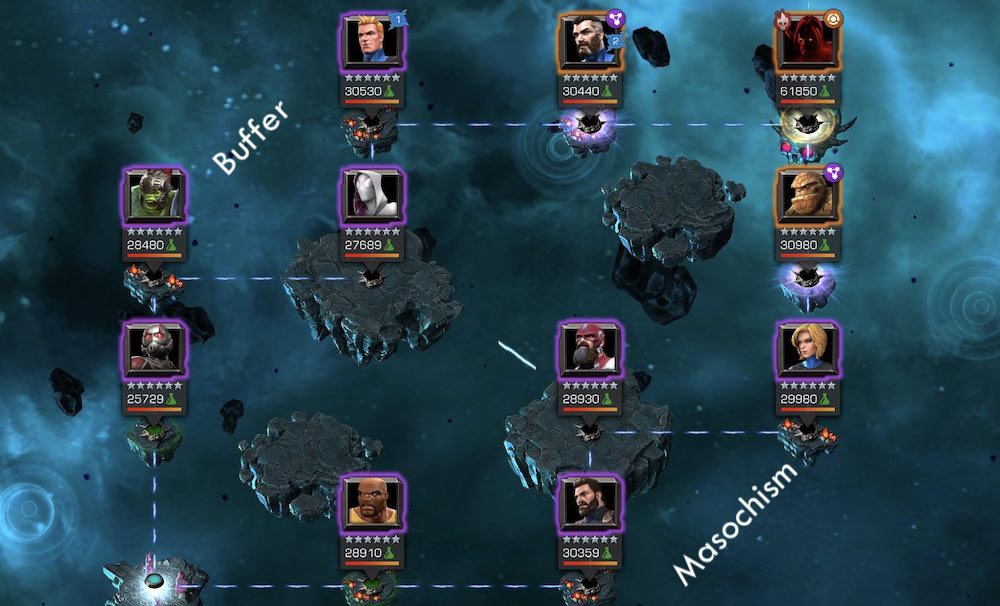 Physical Perfection:
All champion classes but Skill reduce their base attack by 50%.

Buffet – (The Whole Left Side has the same buff):
Every 7 seconds the next buff is triggered by the Attacker is immediately nullified. Each time this effect triggers, the defender will regenerate 10% of the max health.

Mix Master:
If the attacker attempts the same basic attack twice in a row, the defender has a 100% chance to evade the second attack.

Spry:
Each time the defender passively evades an attack, a fatigue debuff is placed on the attacker reducing their critical rating by 1,000 for 5 seconds.

Shifting Immunity – Blood and Poison:
The defender starts the fight with bleed immunity which alternates every 10 seconds with poison immunity. When an immunity triggers, it purifies any corresponding effects.

Blood in the Water:
While the attacker is suffering from a debuff, the defender gains a passive fury granting +200% attack rating lasting until all Debuffs on the attacker expires. 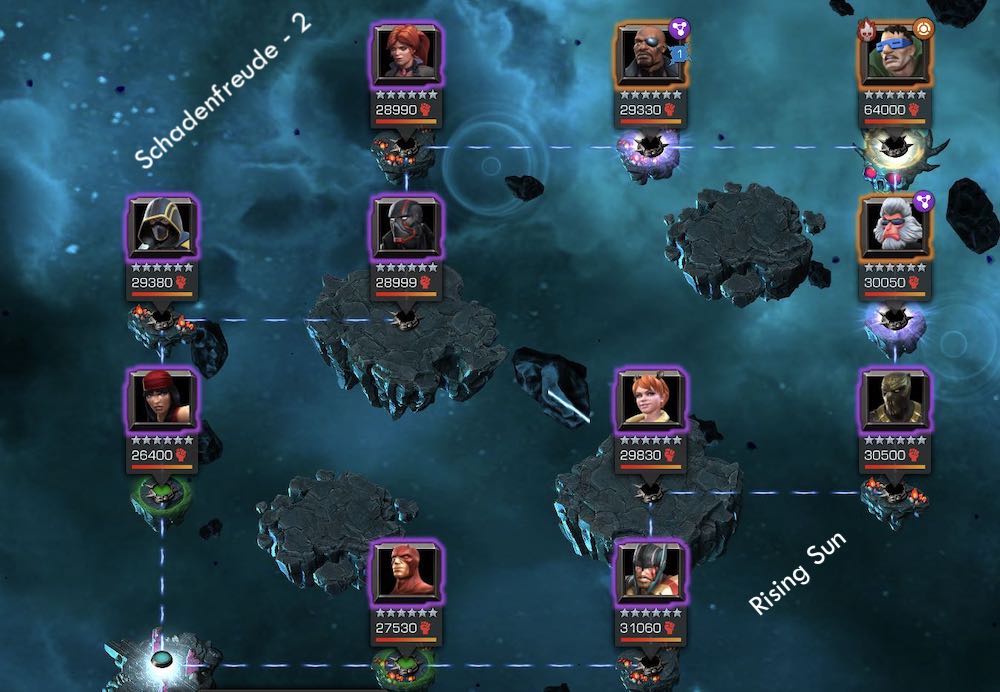 X-Gene:
All champion classes but Mutant reduce their base attack by 50%.

Schadenfreude – 2 – (The Whole Left Side has the same buff):
Each time the attacker is inflicted with a debuff, the defender gains a fury buff granting a 240% attack rating for 8 seconds. This fury doesn’t stack multiple times.

Shock Tether – 3:
If either champion has not made a contact within 6 seconds both gain a shock debuff dealing 50% of their own base attack over 3 seconds.

Hurt Locker:
Using the same special attack twice in a raw gives the attacker a delayed blast charge for 5 seconds which may be removed by landing a heavy attack. If the blast expires, the attack takes 50% of their health as direct damage.

Encroaching Stun:
Every 20 seconds the attacker becomes stunned for 3 seconds unless they are performing a special attack when the times expire. During this stun, the attacker’s armor rating is doubled. 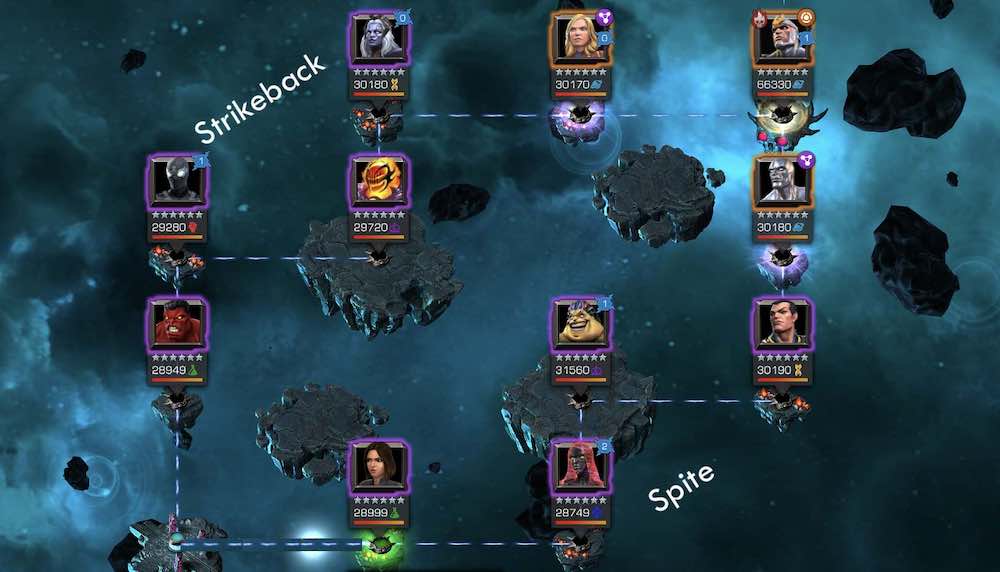 Strikeback – (The Whole Left Side has the same buff):
When damaged by a special attack, this enemy gains 1 bar of power.

Mystic Conditioning 2:
Whenever the attacker attempts to remove buffs with nullify, fate seal, or stagger the chance of all future Nullify, fateseal, and stagger effects are reduced by 15%.

Aspects of evolution:
Whenever this defendant fills a bar of power, they raise their attack, armor, critical resistance penetration, combat power rate, and ability accuracy attributes by 5% for the remainder of the fight.

Special Delivery:
The attacker begins the fight with 15 combo charges. Each landed basic attacks decrease the combo charge by 1 and launching a special attack will reset the charges. If all charges are removed, the attacker suffers a passive degen equal to 100% of the defender’s attack rating over 4 seconds. 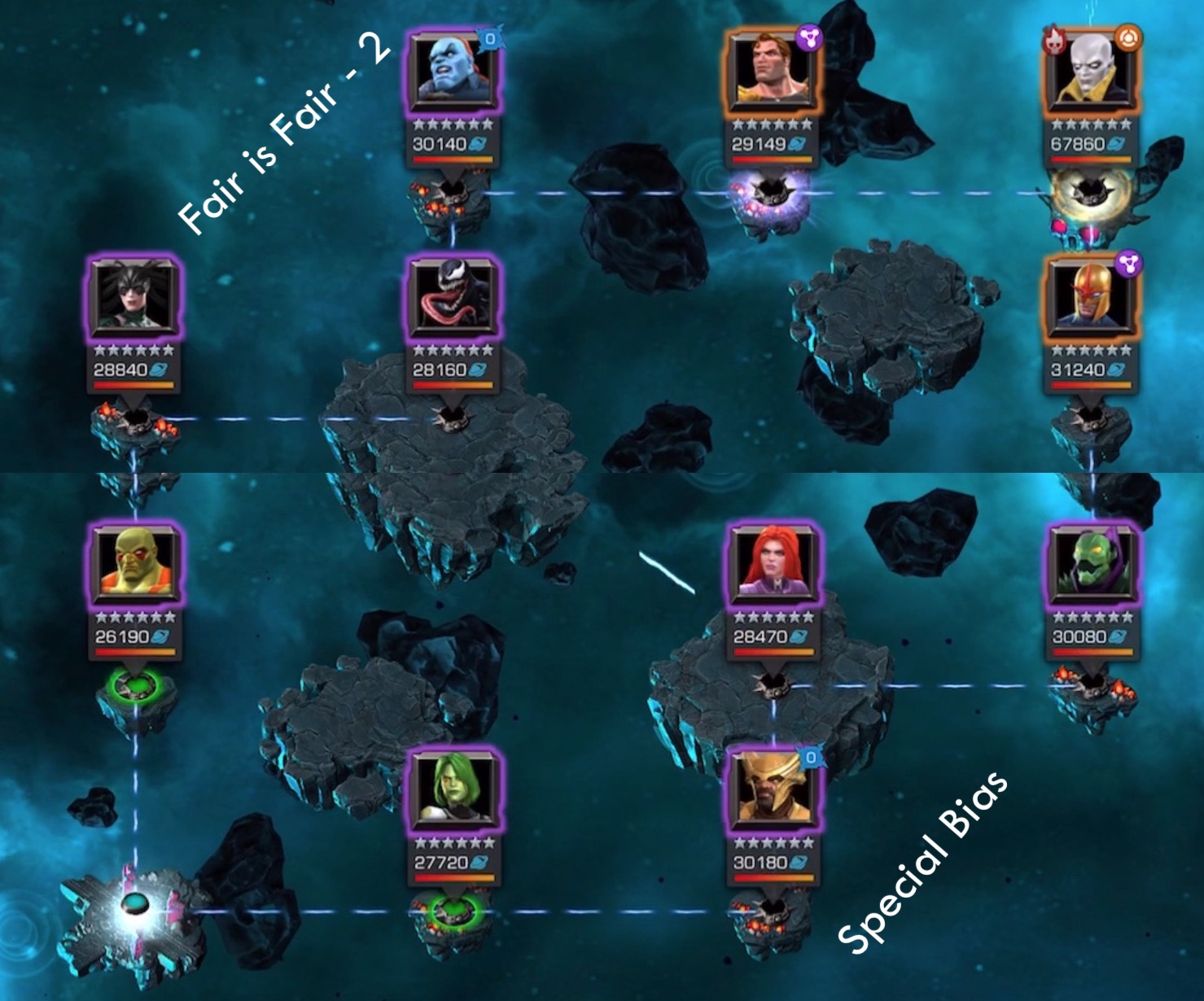 Ancient Knowledge:
All champion classes but mystic reduce their base attack by 50%.

Fair is Fair -2: (The Whole Left Side has the same buff):
Whenever one of the defender’s buff is nullified, attacker’s power is locked for 4 seconds.

Rich Gets Richer – 3:
Whichever champion has more unique buffs gains 12% of a bar of power every second.

Crumbling Armor:
If the attack hasn’t landed a hit in 6 seconds, they receive an armor break debuff. 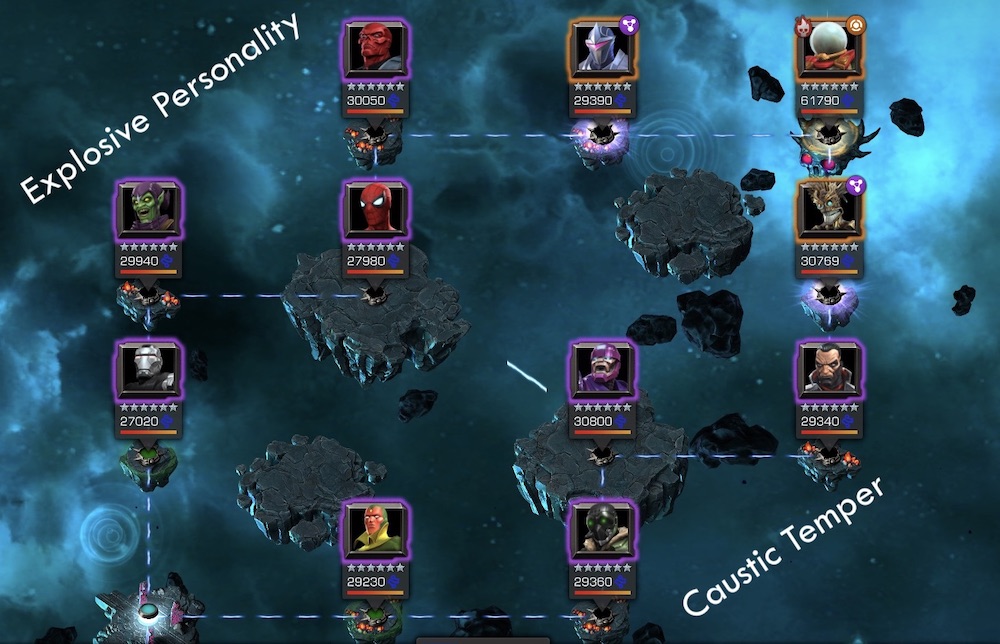 Global Buff (Applies to all champions Except Boss)

Stellar Pulse:
All champion classes but Cosmic reduce their base attack by 50%.

Explosive Personality: (The Whole Left Side has the same buff):
When the defender blocks an attack, they activate an armor up buff, boosting Armor by 25%. Upon reaching 5 stacks of armor up generated by Explosive Personality, armor up stacks explode and remove 25% of the attacker’s max health.

Caustic Temper: (The Whole Right Side has the same buff):
This Defender has a50% chance to inflict poison when struck, dealing for 15% of the attacker’s max health over 10 seconds. Additionally, if the attacker has no active fury buffs, the defender takes 90% less damage.

Nano Plague:
Whenever a robotic champion gains a poison debuff, they instead gain shock which deals 85% of the defender’s attack as direct damage over 5 seconds.

Toxic Behavior
If Mysterio has 3 chemical gas for 8 seconds, they are automatically converted into a poison debuff on the attacker.

Toxic Splash:
Activating a Special attack allows the defender to remove all poison debuff on attackers, dealing 65% of the attacker’s attack as direct damage.

Toxicant? Toxi-can!:
Both the attacker and the defender strikes have a 20% chance to apply a poison debuff, dealing 50% of their attack as direct damage over 10 seconds and reducing recovery rate by 30%. 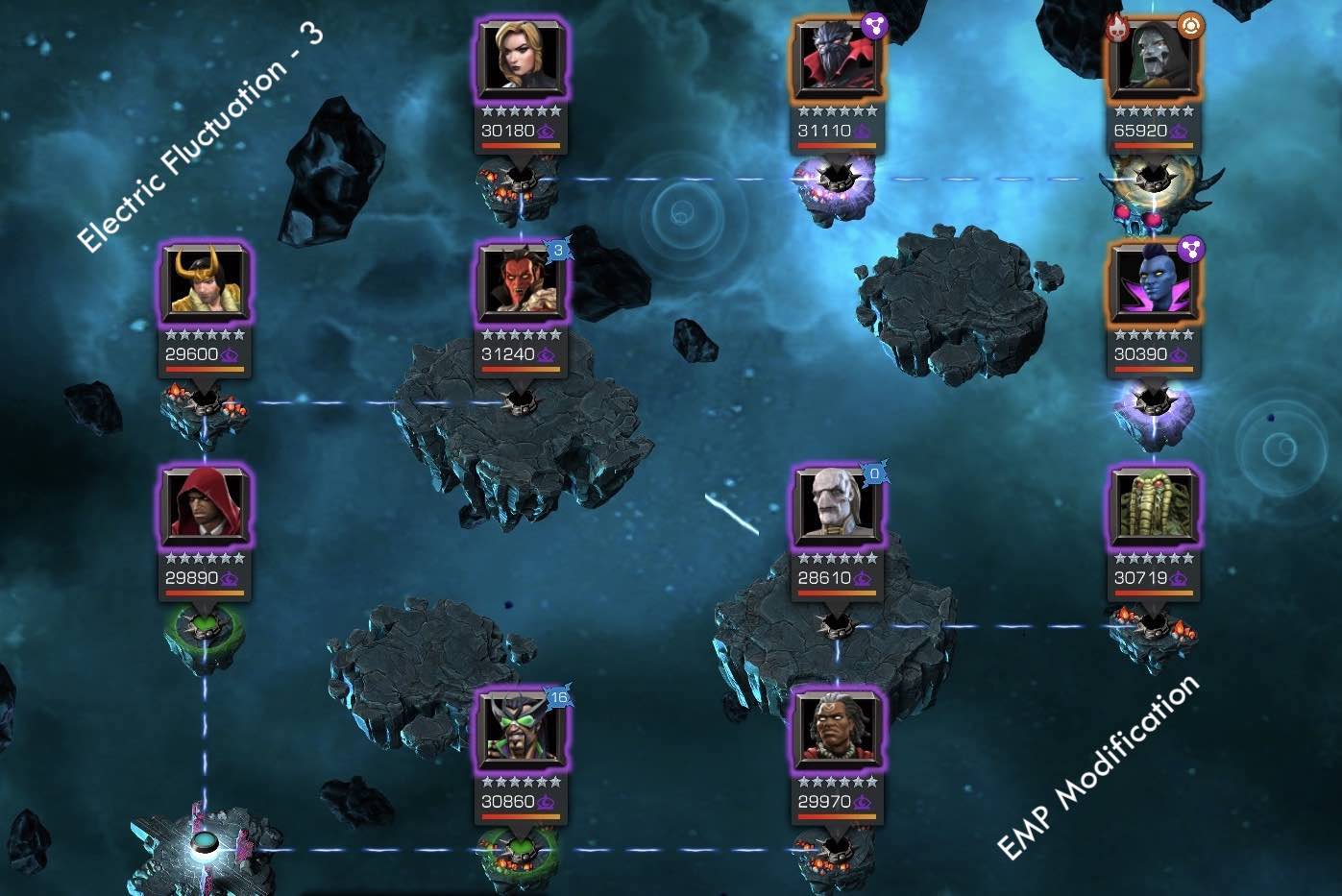 Split Autom:
All champion classes but Science reduce their base attack by 50%.

Electric Fluctuation – (The Whole Left Side has the same buff):
The duration of the Attacker’s Buffs is reduced by 5 seconds, and if they are Robot they suffer 70% reduced ability.

Haazareth Rage:
While the Aura of Haazareth is active this defender is more likely to activate special attack 2.

Haazareth Vengeance
Whenever the Defender is knocked down, they have a 50% chance to activate Aura of Haazareth for 6 seconds.

Shatter:
Nullify abilities shatter their targets dealing 1,300 Direct Damage for each effect nullified in this way.

Burden of Might:
The opponent’s power gained by striking or being struck by their opponent is reduced by 15% for each buff currently active on them. Additionally each time a buff activates on them for any reason, they lose 25% of their max power. 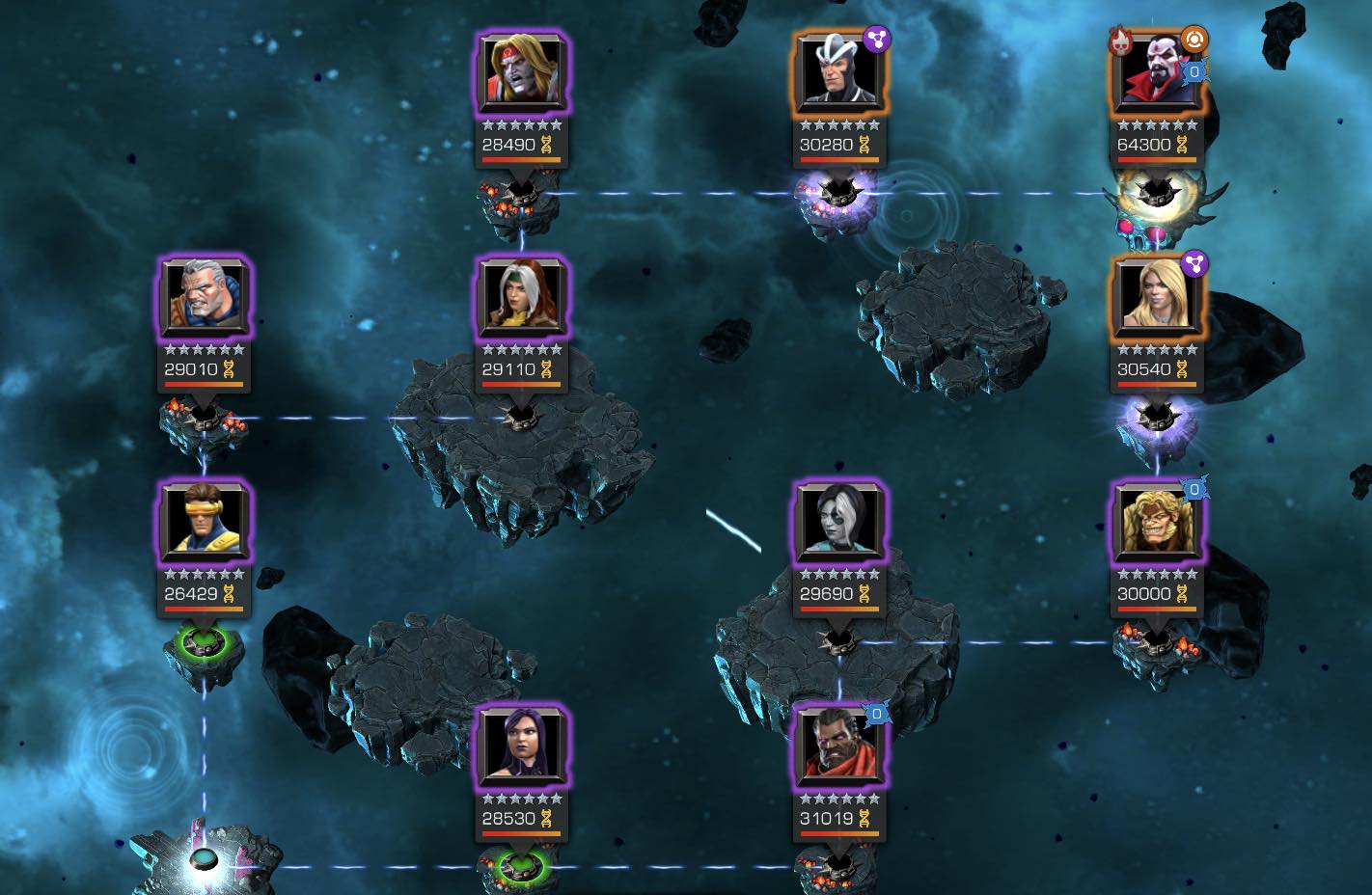 Overlocked:
All champion classes but Tech reduce their base attack by 50%.

Power Reverse – (The Whole Left Side has the same buff):
Special Attack for Both Champions Cost 50% less Power.

Dark Intellect
Well-timed block against contact attacks has a 100% chance to inflict degeneration, dealing 90% of the attack as direct damage over 3 seconds.

Force of Will:
The defender is immune to ability accuracy modification passives and debuffs.

Critical Setup:
When the attacker ends the combo with the same attack they ended previously, the attack is a guaranteed critical.

Spiked Armor:
Spikedarmor provides further protection when struck by critical hits, increasing, this champion’s physical resistance by 20% for 5 seconds, additionally 6% attack as physical damage is health back to the opponent.